On the occasion of the 25th anniversary of UbuWeb (1996-2021), the now legendary website founded by Kenneth Goldsmith in 1996, the Château de Montsoreau – Museum of contemporary art is dedicating an exhibition to the New York artist, ex-art director, ex-sculptor, ex-artist, ex-poet, and now author.
First laureate of poetry at MoMA, Kenneth Goldsmith is one of the major figures of post-internet contemporary art, and one of the fathers of « uncreative writing », a discipline he teaches at the University of Pennsylvania.

“ Plagiarize your plagiarizers.
Bootleg your bootleggers.
Pirate your pirates.”

Ubu, King of the avant-garde
In the early days of the web, several years before the appearance of Wikipedia (2001), Kenneth Goldsmith created the UbuWeb site in homage to Alfred Jarry, a free platform providing free access to avant-garde artworks that were previously unavailable on the web or difficult to consult. Initially an artisanal archiving site, UbuWeb has enriched its corpus of artworks to such an extent that it now rivals the world’s greatest museums.
By applying the rules of streaming to artistic production, this pirate site offers Internet users the possibility of downloading an unfathomable quantity of texts, posters, historical or unpublished videos of the greatest artists of the 20th century. Clandestine and pirate site, defying all copyright rules, UbuWeb registers today millions of monthly connections.
1996, the exhibition at the Château de Montsoreau – Museum of contemporary art questions the complex and multiple status of UbuWeb, which is at once an archiving site, a digital library, a virtual museum and a militant work of art.

The opera of life
The 1996 exhibition opens with Soliloquy, a conceptual piece created by Goldsmith the same year.
In a large all-over, the installation reproduces all the words spoken and recorded by the artist during the week of April 15 to 21, 1996, thus laying the foundations for the great work of UbuWeb.
Divided into 7 acts, like an opera, Soliloquy is framed by the unity of time (7 days), action (Goldsmith as the sole creator of reality), and place (New York), echoing Andy Warhol’s A: A Novel, in which the artist recorded and transcribed a friend’s monologue for 24 hours.
Beyond the writing challenge, Soliloquy represents, Goldsmith questions language as an environment and its potential to materialize. 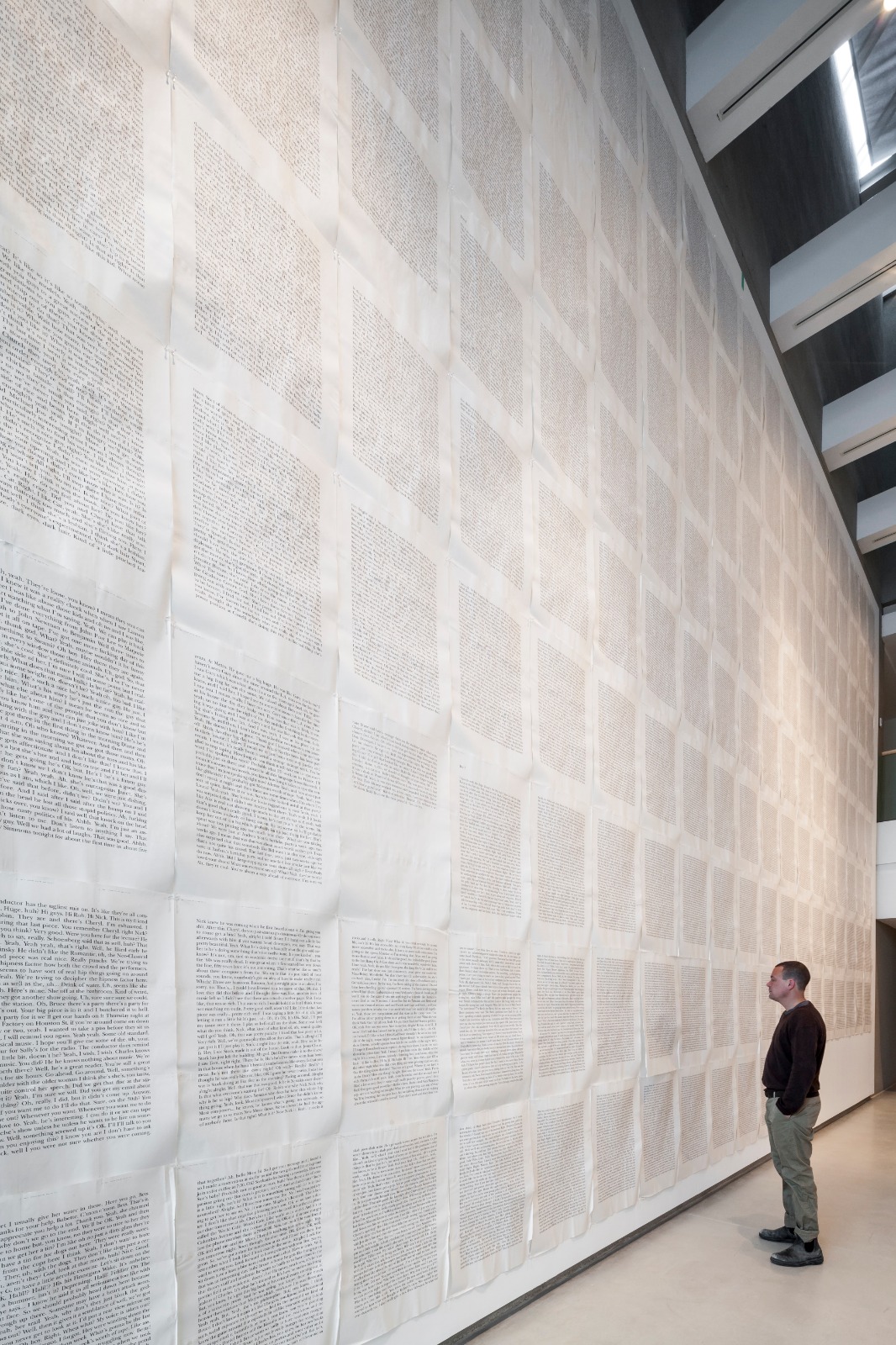 “I want people to feel and retain the weight of language. I want them to feel the materiality of language.”

The Odyssey of the Net
1996 shows a possible parallel between UbuWeb and the Homeric epic. By its extent, its architecture and its constantly expanding form, UbuWeb appears as one of the largest museum archives ever assembled. Its history constitutes a great epic poem of the creation of the net, inscribed in the long time of collection and accumulation.
Just as Homere’s work occupies a major place in Greek literature because it alone represents the epic genre at that time, so UbuWeb has become a unique work, with complex ramifications, in search of universality. 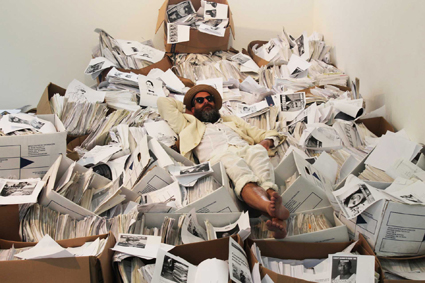 “ If every word spoken every day in New York City somehow materialized into a snowflake, there would be a blizzard every day.”

For a free culture
Influenced by the use of samples in hip-hop culture, Kenneth Goldsmith focuses his work as an artist on a particular aspect of conceptual practice: appropriation.
For Day (2003), he typed out every word that appeared in the September 1, 2000 edition of the New York Times newspaper.
In the age of the Internet, Goldsmith advocates the massive use of databases, programming and intentional plagiarism. The writer is now the one who appropriates existing works, makes massive use of copy and paste, chews and digests the words of others and proposes them in a new form, in a new context, thus putting forward the relative importance of subjectivity and personal expression.