Overlooking the Loire, the Château of Montsoreau was built on 11th century remains of the Monte Sorello castrum, mentioned in a 1089 document. Montsoreau is composed of the word “Mont”, which refers to the hillside that dominates the confluence of the Vienne and Loire rivers. At the beginning of the 11th century, the seigneury of Montsoreau was a strategic and military point as well as a grant located on the river. The castle of Monte Sorello belonged to Gautier of Montsoreau, a fervent believer who in 1101 gave Robert of Arbrissel and Hersende of Champagné land to build the Abbey of Fontevraud. The seigneury of Montsoreau then became the property of the Savary of Montbazon family, then of the Craons and the Chabots. It was Jeanne Chabot’s marriage with John II of Chambes that brought Château de Montsoreau into the great history of France. Private adviser to King Charles VII, he began building the chateau in its current form in 1450, and as a man of power (he was ambassador of Venice and Turkey), he exercised an undeniable influence with the King. During the Renaissance, many kings and queens would stop by the chateau: Louis XI in 1471, Anne of Brittany and her daughter Claude of France in 1505, François I in 1508.

From the middle of the 15th century until the beginning of the 16th century, the children of John II of Chambes, John III, Philip, John IV and Charles enjoyed, maintained and beautified the chateau. The 17th century saw the decline of Montsoreau. René of Chambes, sentenced to death for counterfeit money and salt, went into exile in England for the rest of his life. After the French Revolution, the chateau was put up for sale and then occupied by nineteen different owners. At the end of the 19th century, it was in a state of advanced decay. In the 19th century, during their journey along the Loire, Turner and Rodin, like many artists, were fascinated by the romantic aesthetic object that the chateau represented. Thanks to Senator of Geoffre, the Maine et Loire department acquired the various parcels of land that make up the chateau in 1910 and undertook major restoration campaigns in 1923 and 1997. 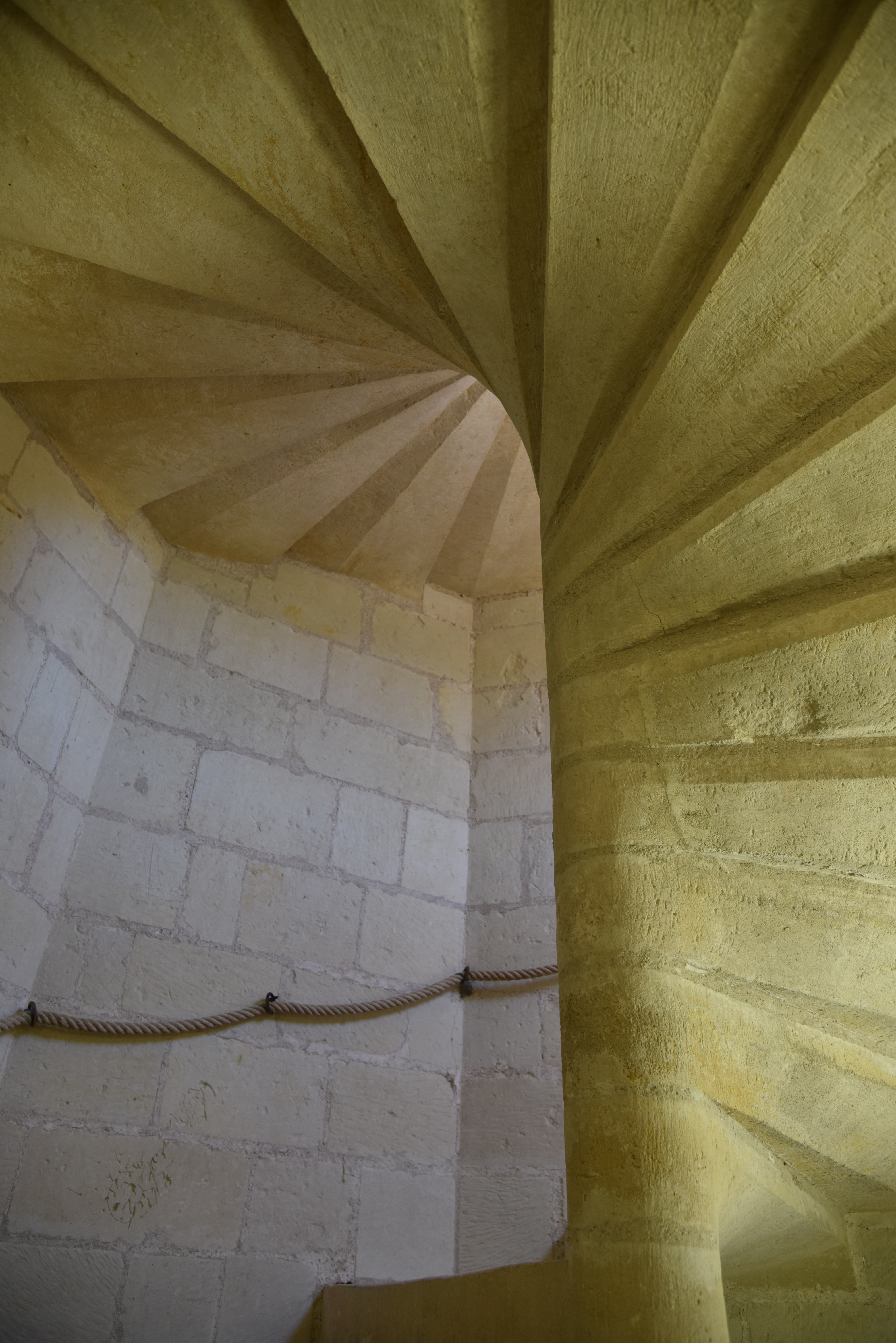 John II of Chambes had the Château de Montsoreau built in the 1450s, about sixty years earlier than the other chateaux of the Loire. The construction of the chateau took about ten years. It is a colossal project: 5000m3 of tufa stone, 400 quintals of lead, 92,000 cut stones, 1000 trees cut to make the framework… It is a pioneering building that marks the transition from military architecture to pleasure architecture. The large windows, the 45 crossed windows, the 25 fireplaces, or the attention given to hygiene problems mark the attention given to comfort. The main building, located on the banks of the Loire, was built first.  The right wing was built a few years later. Two square towers frame the main building. At a time when round towers were being built, this avant-garde choice foreshadowed the corner pavilions that would be built later. The ground floor and the cellars on the Loire side allow the control of navigation on the Loire. The main staircase leads to the ground floor and first floor apartments. The large ceremonial hall is seventeen metres long. It is illuminated by five windows and heated by two monumental fireplaces. It was probably John III of Chambes who built the staircase on the courtyard side, whose polygonal shaft is covered with a terrace. It is decorated with pilasters bordering the windows, antique medallions, Italian-inspired putti and candelabra carried by lion’s feet. Inside, the spiral staircase leads to a sublime palm vault. The terraces (35 metres high) from which you can now admire the view of the confluence of the Vienne and Loire rivers are the remains of the old walled path that collapsed in the 19th century.

THE CHÂTEAU OF MONTSOREAU
AND THE ARTS

Through its avant-garde architecture and its strong link with the river, Château de Montsoreau has inspired artists throughout the centuries, from Rodin to Turner, Flaubert, Rabelais and Alexandre Dumas.

Written between 1845 and 1846, Alexandre Dumas’ novel The lady of Monsoreau is part of a trilogy by Alexandre Dumas on the Renaissance that includes Queen Margot, the Forty Five and the Lady of Monsoreau. This novel tells the love story between Bussy of Amboise and Diane of Méridor, wife of the Count of Montsoreau.  The political context highlights the political and religious unrest under the reign of Henry III. Taking some liberties with History, Alexandre Dumas confronts the characters of Charles of Chambes, Count of Montsoreau, Françoise of Maridort, his wife and Bussy of Amboise, the lover. The plot takes place in 1578, six years after the St. Bartholomew’s Day massacre. Succeeding his brother Charles IX, Henry III began his reign in a country divided by the struggles between Catholics and Protestants and had to face many plots led by his brother François of France. The latter offered himself the services of a gentleman Bussy of Amboise who, during an ambush, was wounded and then treated by Diane of Méridor, wife of the Count of Montsoreau. The budding romance between the two lovers would provoke jealousy and revenge on the part of the Count. The fortune of The Lady of Monsoreau in the history of music and cinema is immense. It was adapted into opera in 5 acts and 7 tableaux by Gaston Salvayre (libretto by Auguste Maquet) and performed at the Théâtre de l’Opéra in Paris in 1888. A best-selling novel, it is the subject of one of the very first silent films in the history of cinema in 1909, “La signora di Monsoreau” directed by Mario Caserini. In their turn, Emile Chautard in 1913, René Le Somptier in 1923, Yannick Andréi in 1971 and Michel Hassan in 2006 adapted it for cinema and television.

In the watercolour on display at the Ashmolean Museum, Turner represented a view of the confluence of the Loire and Vienne rivers. It was made in 1832 during his trip to the Loire Valley. In the distance, we can see the bell tower of the collegiate church of Candes Saint Martin and the chateau of Montsoreau with its port, restored and reopened to navigation since 2017.

Rodin’s taste for buildings and heritage (cathedrals in particular) led him to collect photographs of architectural views. From 1907 to 1910, he brought up, in his garden, the central part of the facade of Issy-les-Moulineaux chateau, built by Pierre Bulet at the end of the 17th century and burned down in 1871. Around 1897, Auguste Rodin, fascinated by the architecture of the Château de Montsoreau, drew a view of the north facade of the building. Rodin does not draw the building as he sees it, nor as it is before his eyes – in a state of advanced ruin – but in its entirety, as it was during the Renaissance.

On May 8, 1847, Flaubert made a trip to the Loire Valley with his friend Maxime du Camp. Enchanted and seduced by the Loire Valley, they published their entire travel diary upon their return entitled Par les champs et par les grèves:

“Anjou smells of Italy. Is it memory? remains of influence? or the effect of the sweet Loire, the most sensual of the rivers? In Montsoreau we turn left and take the levee which extends to Saumur between the Loire and the hills where the houses are intertwined with the rocks covered with brambles. So we go on a joyful and carefree journey, talkative and silent, singing and smoking; it was for us one of those days that makes us love life.” 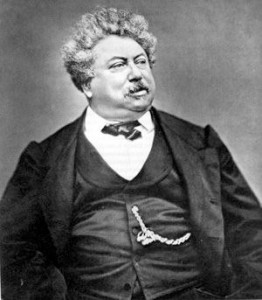 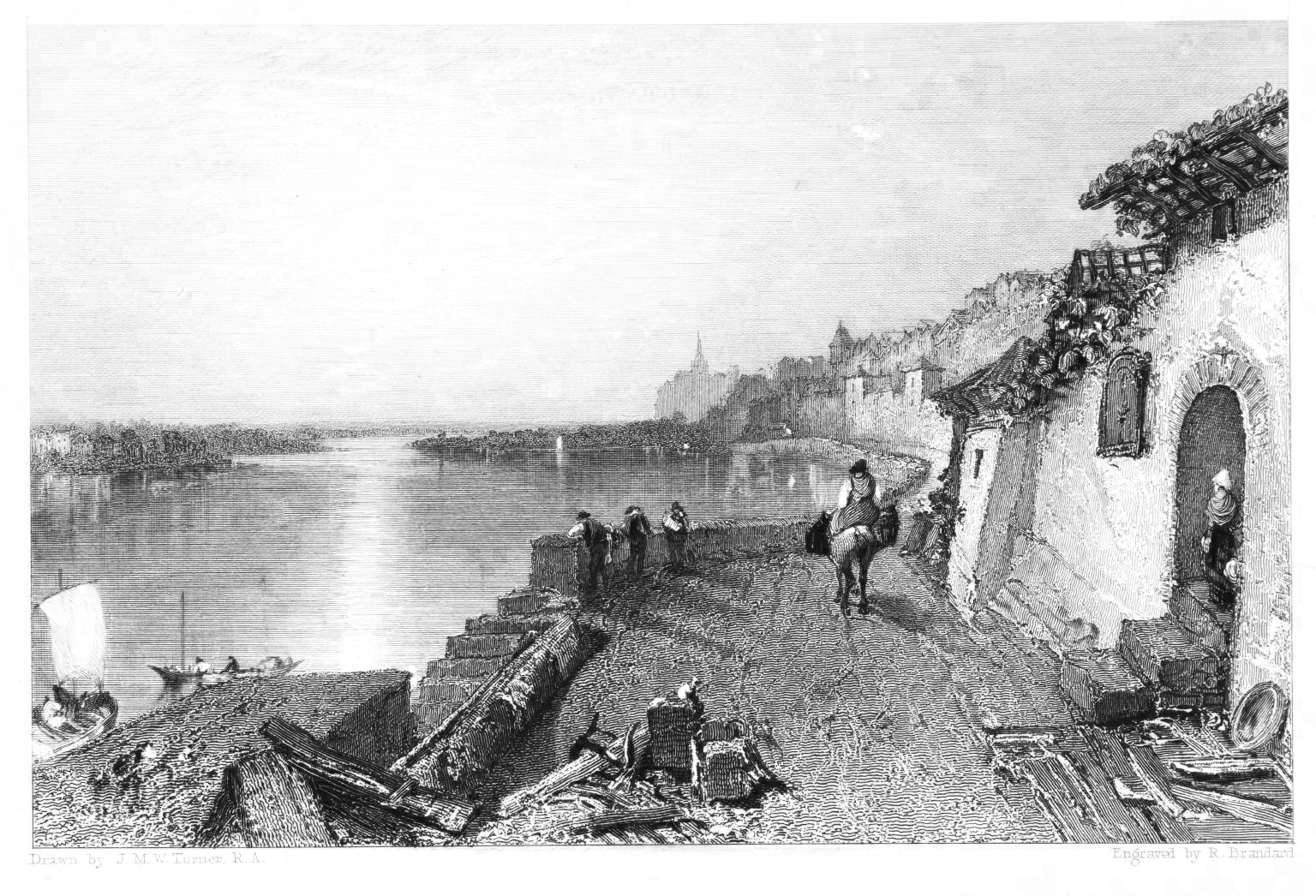 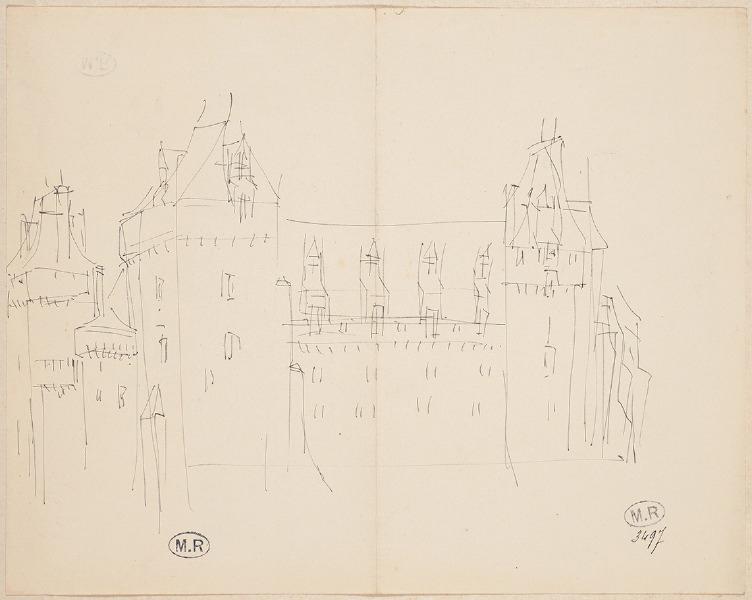 François Rabelais was born in 1483 or 1494 in La Devinière, 15 kilometres from Montsoreau. Rabelais would have spent his first years there and located the history of Gargantua there. In Gargantua, after his victory over Picrochole, Grandgousier rewarded his loyal servants with his  “chateau and neighbouring lands.”


6th century: The Restis estate occupies the Montsoreau site.
990 : The Count of Blois Eudes I transformed the site into a fortified town.
1101 : The abbey of Fontevraud was founded by Robert of Arbrissel and Hersende of Champagne on the lands of Gautier of Montsoreau.
1152: Henry II Plantagenet, future King of England, besieged the fortification.
1213: The seigneury of Montsoreau becomes the property of the Savary of Montbazon family.
1362: The Craon family acquires the seigneury.
1398: The seigneury reverts to the Chabot family.

1424: Joan of Arc meets the king at Chinon Castle.
1450 : John II of Chambes bought the castle of Montsoreau from Louis II of Chabot.
1450-1460: He had a chateau built there.
1473: John III of Chambes succeeds his father.
1560: John IV of Chambes inherited Montsoreau.
1568: the Château de Montsoreau was looted by the Protestants, the Sainte-Croix collegiate church located in the village was razed to the ground, and the city’s fortifications were destroyed.
1572: Saint Bartholomew Angevin.
1575: Charles of Chambes becomes Count of Montsoreau and marries Françoise of Maridor who
inspired Alexandre Dumas to become Lady of Monsoreau.
1634: René of Chambes, son of Charles, was sentenced to death as a counterfeiter and saunier. He fled to England.
1804: Marie Geneviève of Chambes, granddaughter of René of Chambes, sells the Montsoreau estate.
1910: The chateau is in ruins.
1913: The Maine-et-Loire department acquires the various properties that make up the chateau.
1923: 1st restoration campaign
1997: 2nd restoration campaign
2001: The Château of Montsoreau opens to the public with a sound and light tour entitled “Les imaginaires de Loire”.
2015 : Philippe Méaille, a French contemporary art collector, founded the Château de Montsoreau-Museum of contemporary art.